This guide will walk you through setting up Mariana Trench on your machine and get you to find your first remote code execution vulnerability in a small sample app.

Mariana Trench requires a recent version of Python. On MacOS you can get a current version through homebrew:

On a Debian flavored Linux (Ubuntu, Mint, Debian), you can use apt-get:

This guide also assumes you have the Android SDK installed and an environment variable $ANDROID_SDK pointed to the location of the SDK.

For the rest of this guide, we assume that you are working inside of a virtual environment. You can set this up with

We'll use a small app that is part of our documentation. You can get it by running

We are now ready to run the analysis

The analysis has found 4 issues in our sample app. The output of the analyis is a set of specifications for each method of the application.

The specifications themselves are not meant to be read by humans. We need an additional processing step in order to make the results more presentable. We do this with SAPP PyPi installed for us:

The last line of the output tells us that SAPP started a local webserver that lets us look at the results. Open the link and you will see the 4 issues found by the analyis.

Let's focus on the remote code execution issue found in the sample app. You can identify it by its issue code 1 (for all remote code executions) and the callable void MainActivit.onCreate(Bundle). With only 4 issues to see it's easy to identify the issue manually but once more rules run, the filter functionality at the top right of the page comes in handy.

The issue tells you that Mariana Trench found a remote code execution in MainActivit.onCreate where the data is coming from Activity.getIntent one call away, and flows into the constructor of ProcessBuilder 3 calls away. Click on "Traces" in the top right corner of the issue to see an example trace.

The trace surfaced by Mariana Trench consists of three parts.

The source trace represents where the data is coming from. In our example, the trace is very short: Activity.getIntent is called in MainActivity.onCreate directly.

The trace root represents where the source trace meets the sink trace. In our example this is the activitie's onCreate method.

The final part of the trace is the sink trace: This is where the data from the source flows down into a sink. In our example from onCreate, to onClick, to execute, and finally into the constructor of ProcessBuilder. 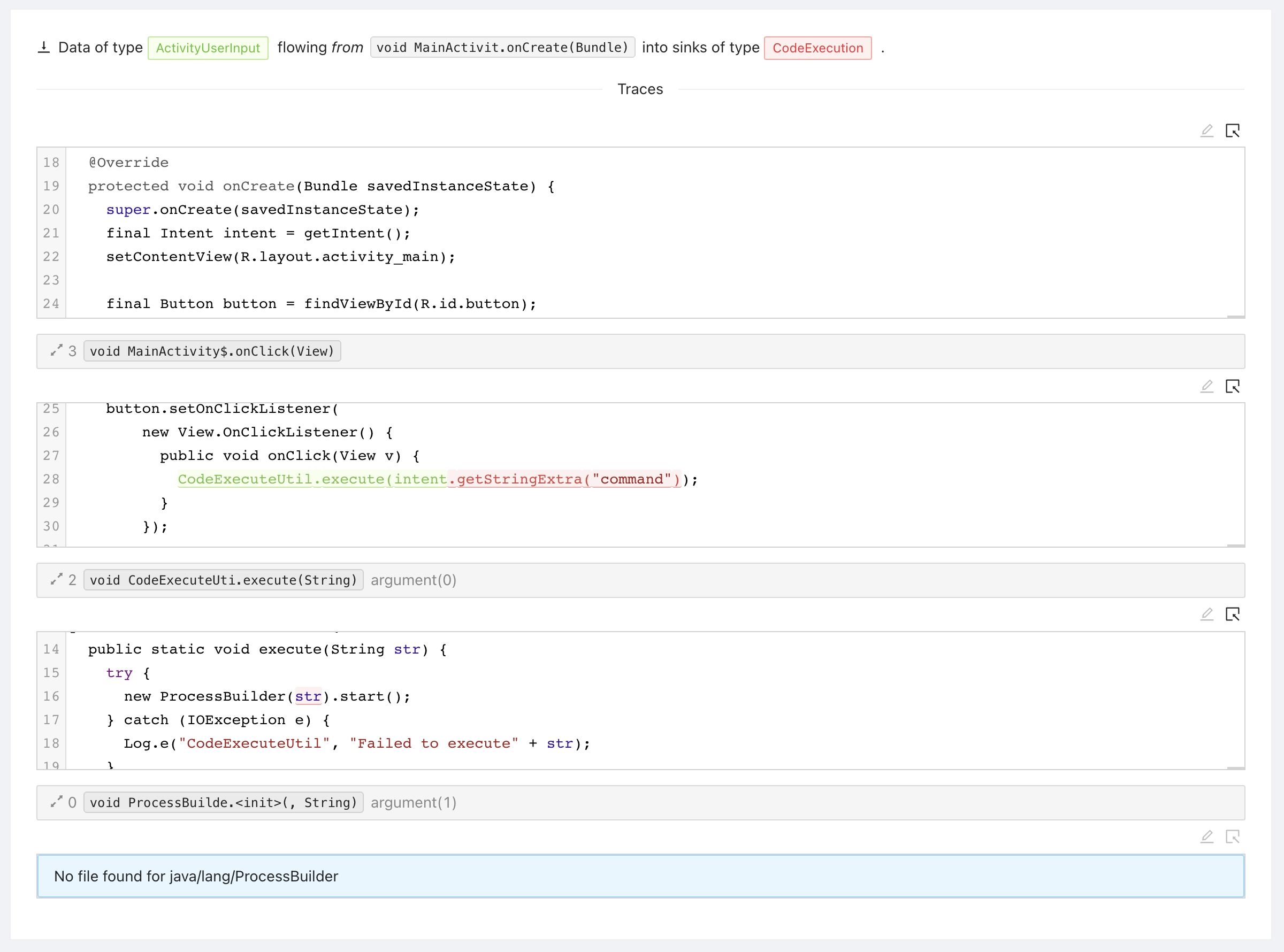 You might be asking yourself, "how does the tool know what is user controlled data, and what is a sink?". This guide is meant to quickly get you started on a small app. We did not cover how to configure Mariana Trench. You can read more about that in the Configuration section.